This week is taking forever already.

A few tidbits for you:

⇒  What’s the meanest thing someone’s ever said to you on social media?  Strawberry Singh’s Monday Meme is all about the haters.

I recently came across this image and I think it sums things up pretty well: 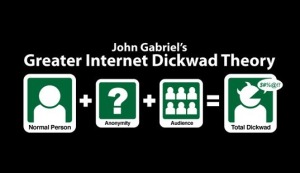 ⇒  The latest Drax Files was about my favorite SL artist, Whiskey Monday.

⇒  Canary Beck wrote a post about a style make-over guide for men in SL.

One of the first things she says is you need at least $8,740L to complete this look.

Now, I appreciate the post, because there are lots of guys who don’t have a clue where to start.

And it’s a ‘ground-up’ build, including skin/shape, etc.

Or is it just me?

⇒  Ciaran Laval reported that Premium Members (that’s me, yay!) will now be able to receive 50 offline IM’s, rather than the previous 25 limit.

Now, my offlines go to email, so it probably won’t be as big a deal to me as other members, but at least it’s a step in the right direction.

Something useful to go along with your premium membership!

⇒  Crossing my fingers that LL and OnLive will work something out and do a package deal (as Jo Yardley suggested) and bundle premium membership with an SLGo subscription.

Now THAT I would find useful!

She can’t use Firestorm (which I looooooovvveeee), so she ended up trying Singularity and then the Alchemy viewer (which I’ve never heard of before).

So I got to wondering – what viewer do you use, and why?

Is there one you’ve tried and absolutely hated and why?

I’ve already sent my email begging to be included.

Although be forewarned, if she picks you and not me, I may have to kill you. 😀

Seriously, though, I think this will be a completely amazing art project!

For most of my SL, I’ve been dancing.

So I’m always working on something.  A dance, a set, emotes, whatever.

But since I have been able to bump up my settings to Ultra, I am having a total blast running around everywhere and playing with my camera and phototools.

I was especially excited when I learned Whiskey Monday got an LEA sim and would be setting up places for photogs to come and play around.

What do you think? 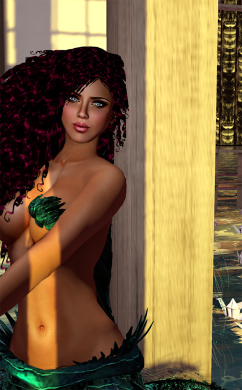 The mermaid costume is called Undine by !deviousMind.

I love her designs. 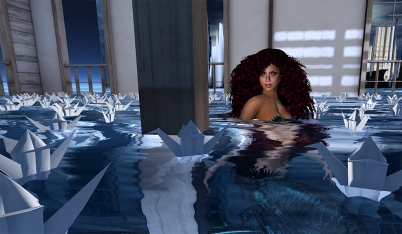 One of the things I had never been able to do before was really see water reflections.

So when I saw a house filled with water and floating birds, I had to snap a few pics.

I can’t wait to see what she sets up next.

The last few days have been rather chaotic for me, something I detest.

I’m a planner – I want everything laid out and ready to go. 😀

So when plans change at the last minute, or people are, you know, people, I sometimes find it extremely frustrating.

I have to take a deep breath and remember, ‘Not my circus, not my monkeys.’ 😛

I think I survived the chaos, and this morning I was feeling inspired.

I have become addicted to taking photos now that I can play around with shadows and windlights.

I’ve been visiting all kinds of places, looking for good locations to shoot, for interesting art, and just generally exploring.

Whiskey Monday is one of my favorite SL artists.  I love her dark, yet hopeful, view of the world.

She was granted an LEA sim and I eagerly await her posts saying she has a new build up to explore.

I went and took some shots today – I hope they turn out as well as I want them too!

And since I neglected to post a LOTD yesterday, I put on an outfit and went exploring for that as well.

I find I am loving having an excuse to play dress up and wear all those things that usually just sit in my inventory.

I am trying to go through some of my older outfits first, so that I can box them or throw them away if necessary.

It’s amazing how much stuff you can acquire in 5+ years. 😛 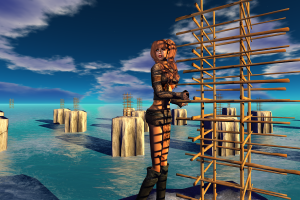 This LOTD was taken at Whiskey Monday’s LEA sim.

I love her work and am always in awe of the images she makes.

When she invited others to ‘Come Play’ at her sim, I had to take her up on the offer.

I took this shot at a couple of different angles, but this one is by far my favorite.

I like the way it came out so much that I didn’t even do any post-processing to it.

No cropping, nothing.  All I did was size it down so it would load on the blog. 🙂

I can’t wait until Whiskey has other areas set up – I’m already planning to go back and try out some underwater shots.

Yesterday I was out and about, exploring and trying new things.

I went to a talk show in SL, The Good Morning Maxine Show, and had a great time.

The other audience members were wonderful.

Maxine was asking questions of the audience about what subjects they would like to see covered on the show.

One of the questions was who would you interview if you could ask anyone?

One of the audience members said Strawberry Singh (a GREAT answer – I love her work!).

But if I could ask anyone – it would be Whiskey Monday.

I am fascinated with her art and would love to have the opportunity to ask her questions and try to find out what makes her tick.

After I mentioned her name, another audience member told me I should follow Whiskey Monday on Plurk.

I blog, I tweet, I’m on Google+, and I am on ASN.  Do I need another social media account?

It already gets overwhelming to keep up with all the content for the few platforms I’m on.

Is there a way to somehow centrally locate everything in one place?

An app that lets me tweet, plurk, blog, and post all at once?  Or at least look at all those networks from one place?

Is it worth joining Plurk?

What other apps/programs do you use to keep your sanity when using multiple social media networks?

I love her work – I am definitely getting myself one of those prints and I can’t wait til this sim is set up and I can go experiment and play myself!

I am so excited to see that Whiskey Monday has gotten approved for an LEA grant.

She is one of my favorite SL artists (even if she doesn’t consider herself one, I do).

Her photos are simply amazing – and every one of them has made me pause and think.  Love her work!

Now that she has a sim, she’s giving everyone a chance to do what she does.

Sort of reminds me of my dance experiment. 🙂

I, for one, will be visiting the sim and taking the opportunity to snap some pics.