Several months ago (or longer, my memory isn’t what it used to be), my friend Nai started an ‘inspiration’ thread.

The original idea was that he would post a ‘theme’ for the week and anyone interested would create something around that theme – artwork, poetry, a song, a blog post – whatever.

Since I’m often on the lookout for inspiration, I thought it was a great idea.

For several weeks, we had fun with creating and sharing on the Blue Moon website.

Then, as it sometimes does, RL interfered and Nai had to step back from the ‘365’ inspiration.

Luckily for me, Nai’s partner Ailsa stepped in.

Ailsa is a talented artist and runs Scribbler’s Cove, where she has her artwork on display.

She graciously picked up where Nai left off and is now hosting weekly art shows based on themes.

She sent out a note card with weekly themes and encouraged us to create submissions for display.

I’ve had a lot of fun trying to come up with pictures for the themes. 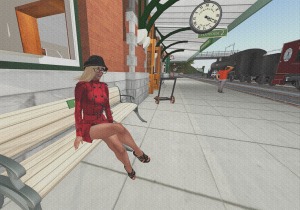 Sometimes I use the pictures I create in my LOTD posts.

Other times, I find myself just wandering around in SL, looking for a great place to capture my take on the weekly theme.

This LOTD was inspired by the ‘Journey’ theme of that week.

It was fun to come up with an idea and then create a picture and a story around the theme.

Often I use it as an excuse to take random pictures, which I don’t do nearly as often as I would like.

I don’t have as much time in SL as I used to, so getting things done on a deadline is challenging. 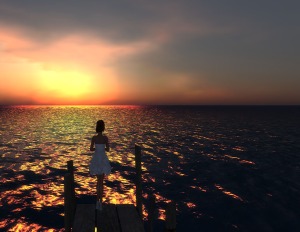 So far, I’ve only missed participating in one week.

(Maybe two, as I’m still trying to find time put something together for this week’s theme!)

My favorite theme was the ‘Suspend’ theme, because I had a ton of fun hanging off of various things and snapping pics.

I think this picture is my favorite so far – I took it for the ‘Edge’ theme.

There’s always something I’d like to fix or do differently.

This one, though, I’m pretty happy with.

And it was the first photo I took – that never happens!

The artists who participate (Winnie, Nai, Beth, and others) are all very talented people and I look forward each week to seeing what they’ve done.

So if you have a few spare minutes, stop by Scribbler’s Cove and check it out.

That means I’ve almost made it through the week – yay!!

Last night there was a lot of nasty weather around here, and so some activities got shuffled around.

Today’s to-do list includes cleaning the house (ugh) in preparation for a party this weekend.

I have a few last-minute errands still, but mostly it’s housework and paperwork left.

I am ready for summer to start – I need a few days to relax!

I was discussing various issues with a friend yesterday, and it seems 2015 is indeed the ‘year of change’ for many people in SL.

New venues opening, old ones closing, friends leaving, people shuffling around – it seems every time I log in, something has changed.

There also seems to be a shift in the dance community from ‘burlesque’ to ‘performance art.’

Perhaps ‘burlesque’ was too narrow a term to encompass what people want to create in dance in SL?

It will be interesting to see what the rest of the year brings. 🙂

I am happy to see some new shows coming up – Fusion Dance Crew is doing a performance on Saturday, as are the Breezes Dancers.

The dancers over at Paramount started a new show – more intimate and a little more risqué than their regular Saturday shows.

They have their regular Saturday show this weekend, and then the new ‘Night Players’ show next Tuesday.

I also saw an ad for a new show by a group called La Femme – I’ll have to try and check it out.

Some of you may have noticed the new look of the blog.

I was also feeling the need for some change, so I changed my gravatar picture.

Let’s see if anyone notices! 😛

I finally took the plunge and changed the theme of my blog.

I really loved the old theme, especially the fonts and the colors, but the layout just didn’t work sometimes.

It was an older theme and didn’t have some of the bells and whistles I wanted.

There are some things about the new theme I’m debating changing – I’m not thrilled with some of the font choices, but I’m not sure if I dislike them enough to shell out $ to change them.

So, I’ll live with it for now.

I’m not even sure how much of a difference it actually makes for some readers – so much of the layout is unseen on a phone or tablet versus what I see on my PC.

But I’m happy with the change – it feels good. 🙂

Now that the blog is under control, I can concentrate on some other projects (RL and SL).

I have research to do, blog posts to write, pictures to take – it never ends.

I love being busy, though – I do my best work under pressure.

And great news yesterday – Nai has been so busy that his ‘365’ inspiration idea took a hiatus.

It’s back, albeit in a different form, and I can’t wait to get started with some of the ideas!

I’ve been thinking about making changes to my blog for some time now.

I think I’ve finally decided on a new theme.

It may seem silly, but I spent a lot of time looking at themes and finding one that I think will work.

Now I have to spend the time to change over to the theme, redo all my widgets, make sure all my links are working, etc. etc. 😀

So the look of the blog may be in flux for a few days while I get all that accomplished.

I’ve also been slowly working my way through my inventory and paring it down.

The ‘Costumes’ folder is killing me, as I knew it would.

Some things are easy to delete, others aren’t.

However, I’ve made a HUGE dent in my clothing folders, so yay!!

I have a few more mesh outfits to go through, but everything else is sorted and ready for new stuff.

Which is good, since there are always a ton of events going on. 😛

Yesterday I visited FaMESHed, The Instruments, and Oneword – so I’ll have some cool pieces to include in upcoming LOTD posts.

I finally buckled down and applied to some feeds and was accepted, so I can also now happily claim to be a syndicated blog. 😀

Now that I’ve gotten a handle on where I’m going with blogging, I can get back to dancing!

I’ve collected a bunch of new props and such, and I’m itching to try them out.

I also need to finally unpack my new Stage Manager and learn how it works.

Enjoy your Tuesday while I’m slaving away sorting costumes. 😛