This new software looks amazing!  Animate your static photos simply and quickly.  Be sure to watch the example video – I can see so many uses for this.

The price is a bit steep – $299 currently, though you can get a discount if you are a student or teacher (scroll down to the bottom for the deal).  I may have to start saving up!

Source: A First Look at Plotagraph Pro with Levi Sim

An interesting tool in Photoshop I’ve never used before.

I shall have to do some playing around and see what mischief I can make with it. 😛

A Tattered Page recently opened its doors for the 3rd round, based on the novel 20,000 Leagues Under the Sea.

There are lots of great sea-themed items (some of which I hope to show in a later post), including an adorable framed pic of a narwhal.

Narwhals have been a topic in my house a lot lately, because of the current Sprint commercial and its use of the narwhal song.

In case you haven’t seen it (or gotten this song stuck in your head), here it is:

This led to a discussion about the Loneliest Whale.

If you haven’t heard the story about the loneliest whale (or the 52-herz whale), there’s a great story on Deviant Art.

You can find it here, and it discusses a current Kickstarter project for a documentary on this poor creature.

In addition, there is some amazing whale art, so spend a few minutes and check it out.

Now that I finally have a Flickr account, I have been busy taking pictures all over SL.

In my efforts to pare down my inventory, I have been taking pictures of myself in old outfits.

After I have taken a pic, I have no qualms about the deleting the clothes.

I decided I wanted to take some pictures in my winter outfits (because the winter sims are quickly disappearing).

I had a quick peek through the Destination Guide and found a wonderful sim called Timeless Memories.

If you haven’t been, you should go.

There are lots of little areas that are decorated with chairs, cushions, animals, and all manner of cuteness. 😀

I spent quite a bit of time there exploring.

There’s an adorable pond with ice-skating penguins and a bakery shoppe.

It actually made me wish for some snow to go play in!

I can’t fit all the pictures I took on the blog, so make sure to take a peek at my Flickr feed and see the rest.

It was all just so cute and adorable and so gosh-darn pretty!

I went back for another visit to the Christmas ExtravaDanza! show yesterday, because there were a few acts I missed the first time around.

I am so glad I went back.

Performers I had missed the first time were Misse Tigerpaw, Setsuna Hirano, Winnie, and Chandra Meehan.

Misse did a cute little number too a mix of songs, including ‘Happy’ by Pharrell.

There were sleds, a dove, and lots of lovely effects.

Setsuna performed my favorite act of the show.

The delicate fairy inside the snowglobe, the wonderful use of particle effects – it was the most enchanting thing I’ve ever seen.

I took a whole series of pics of this act, so visit my photos over on ASN to see them.

I love the snowflake particles and her costume was stunning.

Chandra did a cute little number as a burlesque ginger cookie.

Chandra is the creative genius behind this avatar, the one that inspired me to create my own dance using them.

I may be ‘afk’ over the next few days as the holidays are here.

Merry Christmas and Happy Holidays to all of you!

Much as I hate Yahoo, I thought it would be a good place to put all the show pics I take that don’t make it onto the blog.

However, Yahoo requires a cell phone number in order to activate a new account.

If I wanted everyone on the planet to have my phone number, that would be a sure way to do it.

And then it hit me.

A site made specifically for avatars/RP’ers/gamers to be a replacement for other social media sites that are not ‘avatar-friendly.’  😀

So, from now on, I will be posting my pics (both dance shows and whatever else I take) on ASN.

There are alternatives – you just have to do a bit of looking. 🙂

I looked at the results of the picture experiment polls today, and I have to say, once again I am surprised.

Personally, I liked photos 1A and 2B the best.  (If you need to refresh your memory about the photos, see here.)

My attempt with photo 1A to recreate the windlights in 2A was not successful, but the photo ended up being better in the end.  Poor choice of windlights for 2A, I suppose.  And 1A was the hands-down favorite in the polls.

For the second set of photos, I thought I did a much better job of getting the windlights close.  I prefer the shadows in photo 2B, although it does sort of look like the rocks in the foreground are floating a bit.  However, the overwhelming majority of you thought that photo 1B was better.

The photos 1A and 1B were taken using SL Go.  Since these were the favorites, I suppose it will be worth keeping up my subscription and using it to take photos.

However, the down side for me is that I have a LOT less options when taking photos with SL Go.  I am limited to about 10 preset windlights, and although I can play around with the windlight settings manually, it is not a quick process.

Also, when using Firestorm, I have the option to take the photos at a much higher resolution.  For example, photos 2A and 2B were taken at 5848X3128 and resized down to 1024X548 for the blog.  I personally thought the details were a bit clearer on those photos, with less rough edges than 1A and 1B.

1A and 1B were taken with SL Go and the highest resolution you can set (the only resolution I could use, as I couldn’t locate a way to change it) is 1280X720, which I resized down to 1024X576.  I thought that 1B had the same issue as 2B with the rocks seeming to float a bit, and I thought the snowman in 1A was a little jagged.

So, I will continue to experiment with my photos.  I saw recently that Builder’s Brewery has added some photography classes, so I am hoping to catch one of those and maybe learn some tips and tricks to help improve my photos.

I haven’t yet tried taking photos at a show with SL Go.  My husband has gone to several shows, but again, some of the controls are difficult to master.  So, it may take some experimenting to see if it’s worth trying to use SL Go at a show for pictures.

If you have any tips or tricks you’d like to share about photography in SL, please let me know!

I am immediately confronted with a Yahoo! sign in page.

I hit the back button, thinking I’d been redirected to the wrong place.

Turns out Yahoo! owns Flickr.  I don’t like Yahoo.  Much as I would like to see all the pretty pictures, my loathing at having to use Yahoo overrides that wish.  I already have several email accounts, I don’t want another one.  I foolishly assumed I could use my gmail account (or any email account I chose) to sign up for Flickr.  But, alas, that is not the case.

And so, I bid Flickr a disappointed adieu.  (Just FYI – there was apparently a huge ‘to-do’ when Yahoo acquired Flickr, redesigned the layout, and then implemented the changes with no notice to its users.)

I love being able to peek into the minds and processes of creative people. That said, it bums me out to think that I need a graphics design/art degree in order to ‘tweak’ my photos to make them look ‘good.’ 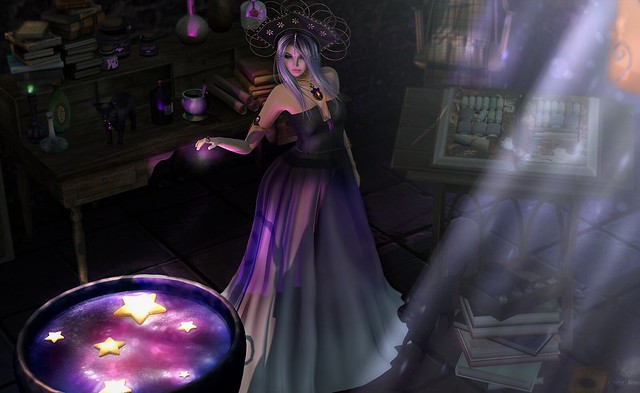 I have kind of a special post today because I actually recorded this photo being edited!

Since my work got featured on New World Notes a couple weeks ago, I’ve been getting questions from people about my post-processing on a daily basis. So I thought, ‘why not just show you all exactly what goes into editing a photo for a blog post’? So I recorded about 25 minutes of footage and cut it down for 5 minutes so you guys can see what I do and how I do it! Maybe…