This weekend I was finally able to see the newest show from the creative geniuses at MJ’s Burlesque. 🙂

The show was originally scheduled for Friday, but due to technical issues, was cancelled.  Luckily, I was able to make the show Sunday.

Nancy was the first to hit the stage, in a sexy piano number.  The staging was perfect, and her steamy emotes were a hit with the audience, left drooling in their seats. 🙂

I always love to watch Nancy perform, because she has such a terrific sense of stage presence.

And she’s one hell of a designer – I wish I had half of her design sense! 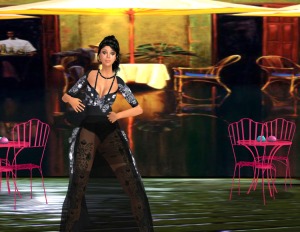 After Nancy, it was time for MJ to take over with her performance tribute to David Bowie.

I love the runny mascara effect she donned – a very moving homage to Bowie’s creative genius.

I must say, I was never a huge Bowie fan, but I’ve been amazed how many songs I never realized were his. 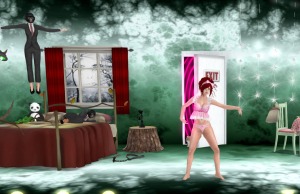 Next up was Zed.  I’m always tickled when Zed dances, because she has such an offbeat, wicked sense of humor.

This time, though, she threw me a curve, and danced to a piece about her nightmares.

I was excited to see the number, because our very own Yumster was going to be dancing as well.  MJ and Nancy were spectacularly frightening as monkey-headed, suit-wearing figures.

Yummy turned out to be an imp who was all kinds of creepy.  The routine was a fantastic piece of performance art and it was amazing. :-O

Nancy was up next with her homage to Bowie.  The set was spectacular, as always.  But what impressed me most with this act were her emotes.

Not many venues do emotes anymore, but I love it when they do and it enhances the story they are telling with their dance.

The last act of the show was MJ, with a fun, sassy, and trashy little number set inside a 50’s-style diner.

Such a great set, and a fantastic show all-around.  If you missed it on Sunday, there will be an encore performance on Tuesday at 2pm SLT.  Enjoy!