I caught sight of this on the LEA Blog and was intrigued, so I wandered over to take a look. 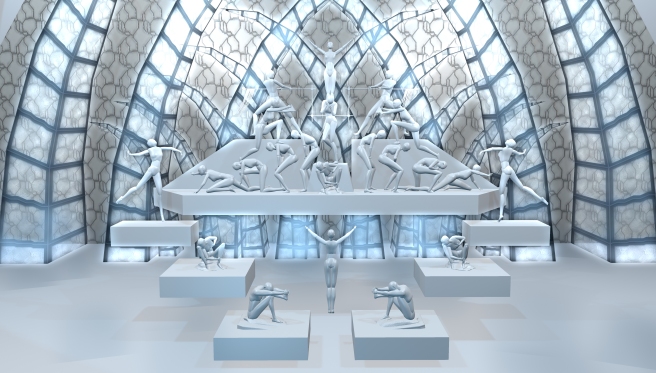 The installation is a stage set filled with statues in various poses.

According to the artist, “Tableau Vivant” is ultimately about gesture — capturing a dramatic moment — but a moment without context or meaning, freely interpreted by the viewer. While this is a static piece, there are options for the viewer to interact with it and to become a part of it. All of the figures are scripted with the pose animations, so viewers can replace any one of them with their own bodies.”

Well, I certainly couldn’t turn down an invitation like that, so I immediately began hopping around, trying out the various poses.  (Excuse my attire, I was working on a routine and was in too much of a hurry to change!)

Who wouldn’t want to be front and center in their own little show?  The installation also includes some options so that you can really immerse yourself, changing the appearance of some things.  “Additionally, the staging can be altered by anyone in various ways using a central control panel at the front of the stage. Adjustments include:

— Lighting controls to set the color and/or ambient brightness of the lights.
— Lighting colors may optionally be set to change randomly at 5 second intervals.
— A particle shower emanating from the upper center figure can be toggled on or off.
— A solid color stage (background panel and floor) can be set to appear or disappear.
— The solid stage background can be moved forward to optionally cover the background scaffolding superstructure, giving a less complicated image.”

I tried turning off both the stage and floor, but I prefer the look with both of them on.  I did set the colors to random and left the particle effects on.

Some of the poses were a little off for me (due to my shoes and my rather tall avi).  But I love interactive art, and this is definitely that.  I love how the random colors give each of the photos a different feel.

In discussing the inspiration for this piece, the artist said, “The conception of my tableau was also inspired by the choreography of Twyla Tharp. Tharp often has her dancers in close contact, climbing over and under each other. I was hoping to capture some of the gestural thrust and energy of her dancers, without being a literal interpretation of any particular piece. The foreground poses are based on sculptures by August Rodin.” 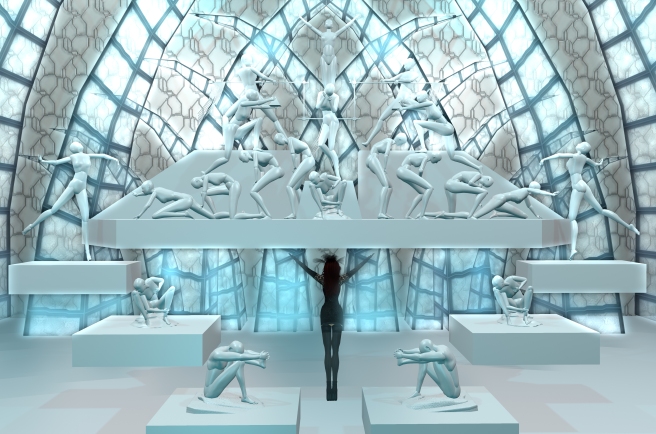 I found this piece fascinating.  I could have spent hours there, hopping from pose to pose to pose, and discovering something new with each move.

I highly recommend visiting and trying this out for yourself.  It would be interesting to have a group of people visit and place themselves in various poses among the statues.

One thought on “FreeWee Ling at LEA27 – Tableau Vivant”