I first heard about this in a thread on SLU.

Some time ago, LL added mesh avatars as an option, which sounded great.

Unfortunately, the learning curve for customizing a mesh avatar is exponentially bigger than with a ‘classic’ avatar.

Recently, I had a friend who signed up and I attempted to help her and explain how the mesh avatars worked.

The result was that, though she is an avid gamer and RPer, she’s never logged in again.

After hearing about the new avatars, I headed over to the sign up page to see what was different.

There are 3 categories to choose from – Classic, Vampires, and People.

I’m not sure what differentiates ‘Classic’ from ‘People’?

This is a screen shot of the mesh avatars currently available.

Is it me, or have they gotten uglier?

I don’t remember seeing anyone in this awkward pose when I helped my friend choose a starting avatar.

None of these look particularly appealing to me. 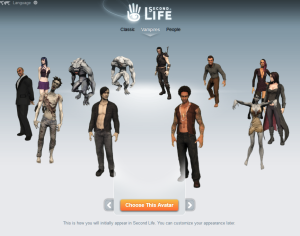 I thought I’d also check out what’s available under ‘Vampires.’

They must be popular, since they get their own category.

After looking at the avatars available, I don’t think LL understands the definition of ‘vampire.’

These are not all vampires – there are werewolves, zombies, and even some kind of monster hunter.

They couldn’t think of a better title for the category than ‘Vampires’?

Finally, I clicked on the ‘Classic’ category, curious to see what was there.

Again, I’m not quite sure what makes the ‘Classic’ avatars NOT ‘People.’

Wouldn’t it have made more sense to label them ‘Classic’ and ‘Mesh’?

I will say, however, that just from looking on the sign up page, the ‘Classic’ avatars are more appealing than the ‘People.’

According to the thread on SLU, the new ‘Classic’ avatars can be found in your library.

Which certainly makes them sound more like ‘People’ than ‘Classic.’  😀

In addition, LL has included a basic AO for the avatars – no more noob duck walk!!

The new avatars don’t please everyone, of course.

Apparently the clothing is mostly no mod and the heights of the avatars are still ‘too tall’ for some.

On the other hand, if they look as good in-world as they do on the sign up page, they get my votes hands down over the fugly ‘People’ mesh avatars, even if they are too tall and have no mod clothing. 😛

If you want to try them out for yourself and you’re using Firestorm, go to Avatar > Choose an Avatar >  Classic.

I tried a couple of them out – Shawna had a nice look, though everything was no copy/no mod, including the AO.

I also tried out Jesse and James.

Jesse’s arms seemed weirdly long, and for some reason both of them had their feet stuck in the ground.

I had to edit their hover height to fix it, though I didn’t have that issue with the two female avatars.

Also, I was able to edit the AO and pull the no mod/no transfer anims into my inventory, if that is of interest to you.

(You never know where you might find a useful anim!)

Have you created a new account/alt lately and used the new ‘Classic’ avatars?

What do you think of them?