On Friday, I went to a new show – The Martina Show.

It was very interesting.

Lots of creativity, but very minimal in other ways.

The opening act was a hula hoop dance.

Now, I have a hula hoop somewhere in my inventory, but I never thought of using it in a dance.

There were some issues with timing, but it was a very creative dance.

I don’t think the dancers were using a mover system, but rather moving manually, which probably accounts for some of the timing issues.

Minimal set, no fancy effects, but a lot of creative thinking. 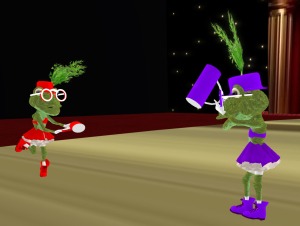 After the hula hoop dance, it was time for the frogs to take to the stage.

Yep, you read that right.

Delightfully adorable as they danced the Charleston.

It was a medley of the Charleston and a rock song, with a cute back-n-forth between the dancers.

The frogs finished up, took their bows, and handed the stage over to Jennifer Beals.

It’s been a long time since I’ve seen Flashdance. 😀

Again, a minimal set, but effective.

It was a challenge to get a picture of this act, as she was dancing and tumbling all over the place.

She danced to the song “What a Feeling” from Fame.

After impressing everyone with her gymnastic and dance skills, it was time for another act.

This time two clowns took to the stage.

The scene is the interior of a beauty salon, and one clown begins to style the other’s hair.

Sadly, RL called me away and I didn’t get to see the end of this act.

I’m told, however, that the hairdresser clown gave the other a huge afro, which resulted in a chase scene around the stage. 😛

There were a couple of other acts, which I also did not get to see.

I’m not sure if there are any additional performances of this show planned, but I’m sure we’ll be seeing more from Martina.

Some of these acts are more performance art than dance, but nevertheless entertaining.

It will be interesting to see what she comes up with next.