I’ve written before about my dislike of mesh heads.

They all seemed to have that ‘I just smelled something terrible’ look.

Then, I saw some new mesh heads hit the market.

The Lelutka mesh heads were really the first ones I saw that made me actually consider purchasing a mesh head.

However, I still wasn’t thrilled with the look of the first three they offered.

Then they came out with the next set of three, and I again considered a purchase.

I own the Maitreya mesh body, which I absolutely love.

And the Lelutka heads are made to work seamlessly with the Maitreya body, so that’s good.

So I wouldn’t have to purchase (or find) skin appliers.

Another point in Lelutka’s favor.

But then I saw a notice about the new mesh head from LOGO.

I had looked at their heads before, but they only use LOGO skins, no appliers.

So with no appliers to use on the Maitreya body, I would have to use the LOGO skins.

At that time, I had just purchased a new skin at Skin Fair, so the thought of changing again so quickly wasn’t appealing to me.

I really liked the LOGO heads, though, especially all the different expressions.

My main purpose for purchasing a mesh head would be for photographs.

Then I saw a notice that LOGO has added appliers for the Maitreya and Slink bodies.

So, I could purchase the LOGO head and get appliers so that I could use it with my mesh body.

So I have a decision to make.

Both the LOGO and the Lelutka heads are the same price.

So which one should I get?

I got demos and tried them all on.

So I thought I’d see what you all think. 🙂

Here’s some shots of the various heads I tried on. 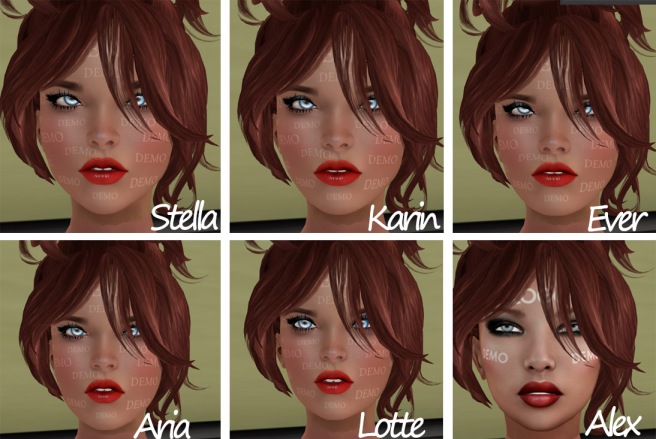 I didn’t include the Lelutka Leda, because it just didn’t look good.

And I only tried on the LOGO Alex, though LOGO has other heads as well.

I want something that will photograph well, give me options, and that I can feel like ‘me’ in.

I like the look of the LOGO skin, though even the darkest tone isn’t as dark as I’d like.

I do feel that the LOGO has the most ‘natural’ looking heads of all the ones I’ve seen.

Don’t mind the weird eye positions of the Lelutka heads – I just didn’t take the time to adjust my eyes for each head.

That’s something I just thought of – LOGO heads come with built-in eyes.

I’m assuming I could use my own?

For the Lelutka heads, I’m thinking the Lotte or the Stella seem to fit me best.

I do like the noses of the Lelutka heads a tad better than the options of the LOGO.

It’s so hard to choose!!

I think the LOGO has more options as far as expressions.

But I would have more options with makeups and skins with the Lelutka.

Help me out and vote for your favorite. 😀